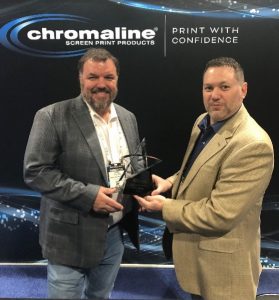 As a Technical Sales Representative for Chromaline, an emulsion manufacturer in the screen print industry, I get a lot of questions about newer LED exposure units. LED units are becoming the latest and greatest technology in screen exposure and there are several companies that are manufacturing them versus the traditional metal halide units. Multiple benefits are being proved through LED technology, including faster screen exposure, decrease in heat generation, and reduced energy cost due to lower power requirements.  Although these added benefits help reduce overhead costs for screen printing shops, there will always be cons to the pros.

The other main difference that I see between LED and metal halide units is the depth of cure that takes place in the emulsion. LED lights have a correct wavelength when exposing emulsion between 350nm and 450nm. Other important components relevant to exposure of emulsion are the milliwatts and millijoules that are given off by the bulb. Milliwatts refer to how bright the bulb is, whereas millijoules can be described as the power and intensity the bulb radiates. These terms and measurements have been determined from the various tests that I have performed using both LED and metal halide exposure units.

There is a limit in stencil thickness, in regard to slower exposing emulsions, specifically dual cure emulsions that could be fully cured with LED units. Once you cross that limit, an abundance of light scatter and undercutting will take over and ultimately degrade the image quality before you can get a proper exposure. There is a visible difference when emulsion has been exposed by LED or a metal halide unit. To sum it up, stencils that are exposed with a metal halide unit will dissolve and wash away easily. However, stencils exposed by LED will result as flaky and can be tougher or more resistant to washing out. This is the exact reason most screen printers using an LED unit prefers a single-part, fast exposing emulsion. You must expose the emulsion as fast as you can before light scatter takes over.

In conclusion, I think it is safe to say the screen print industry has known for many years that single-point light produces the best image quality during exposure. Screen printers and screen makers now have LED exposure units, with 2000-5000 individual bulbs, in them. The unfortunate aspect that should be considered, is the possibility of producing light scatter as well as undercutting of the image. Ultimately, the image quality may be good enough for some, but the results come nowhere near what you could achieve from a single-point light source.  It is my recommendation at this current time that there is no substitute for a single-point light source when your focus is image quality and stencil durability during exposure of emulsions.

Larry Tywater is the domestic Technical Sales Representative -South Central Region for Chromaline Screen Print Products. Tywater has been with Chromaline for 18 years and has an extensive knowledge and hands-on experience within the screen printing industry for over 29 years. If you would like more information about emulsion exposures, you can reach Larry at:

If you have any further questions about drying a screen for screen printing, please contact us today.

Our representatives are available Mon-Fri, 8am - 4:30pm CST.

Subscribe to our e-newsletter. Get the most up-to-date info on screen printing products, events, and special offers!